A.O. Scott of the New York Times wrote, “You will be scared. And also, perhaps even more scarily, moved,” when critiquing the 2014 film, The Babadook.

The film brought in $6.7 million at the box office based on a $2 million budget. It earned itself a 98% critic rating on Rotten Tomatoes. It didn’t, however, bode as well with movie-goers. IMDB holds it at 6.9/10 and only a 73% on Rotten Tomatoes for audience scores.

So why the stark contrast between critic rating and audience acceptance of Jennifer Kent’s directorial debut? 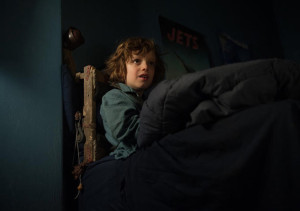 Horror, like any other genre, relies on telling a story based on societal norms and personal beliefs. Storytellers portray changes and disturbances in these norms in the form of the paranormal. Under the right conditions, the genre can toss the covers off our bodies, leaving us vulnerable and exposed.

Andrew Beard, PHD of the University of Oregon argues that “paranormal reality television is a form of what some have referred to as “trauma television,” a site of struggle between the meanings of family and the violence often found in the hegemonic nuclear family ideal.” Although Beard regards specifically paranormal reality television, his statement can be applied to films as well. For instance, during the golden age of horror cinema, movies like The Amityville Horror and The Shining utilized the paranormal to “stand in for violence and trauma taking place in the family.”

In The Babadook, the film focuses on a single mother and her son. The mother reads her son a bedtime story in which a frightening creature called ‘The Babadook’ wants to come into the house to torment those who 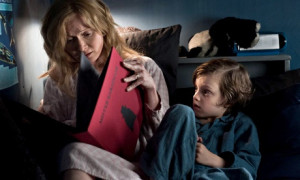 discover him. The creature becomes the backdrop of a story that is much more than just a boogeyman under the bed. The boogeyman is instead symbolic of the mother’s deep depression over the loss of her husband, and the subsequent neglect of her son due to this illness.

What does this all have to do with The Babadook not receiving high acclaim by audiences?

The answer may lie in Annette Hill’s book, Paranormal Media Audiences, in which she writes, “The historical context to ghosts indicates beliefs and practices were closely connected with social and political changes, and cultural and moral instability.” If this is true, it would further promote Beard’s argument in that the golden era of horror film during the 1960s – 1980s stood on a foundation of upset in traditional family values. For instance, during those years domestic violence came to light as a prominent American issue and openly discussed for the first time. The once picturesque image of the nuclear family as portrayed in television like Leave it to Beaver became old-fashioned. Films during the golden era of horror, Beard points out, took the place of societal and changes in family structure in the form of paranormal happenings.

In the twentieth-first century, we are noted for our ever growing acceptance of change in family values, norms and the roles in which we play. Arguably, we are no longer afraid of changes in what was once perceived as ‘traditional family values’. As we become accustomed to an open dialogue of mental illness, family dynamic and social norms, perhaps audiences are no longer content with stories like The Babadook in an era of social progress.

Sometimes, the audience simply wants a good scare, but does that mean storytellers will have to move away from underlying turbulent family dynamics and troubled homes to achieve a realistic and lasting impression? Are dramatic horror films like The Shining and Poltergeist a thing of the past?

While at the heart of the story was a woman suffering from depression and the impact it had over her young son, maybe a story today symbolizing our weaknesses rather than our strengths isn’t enough. Perhaps audiences no longer wish to look under the bed for hidden messages, and in the end, wanted more than an imaginary creature called The Babadook. -C.Persaud

Hello and welcome! I am a writer and a horror fan. Here, you'll find my published work and learn a little about me. Please consider my editing services as well. Take a look around and stay awhile. -Christina P.

Names for people who read a lot:

Any book title with "house" in the title innately scares me. I'll be passing a shelf and I see "The House That..." and I'm like "shit, what happened in the house?? Is that gonna happen in my house?? How did they get rid of what was in the house??"